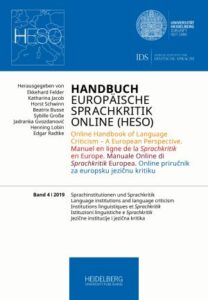 The handbook thus contains comparative articles that focus on a single language or on multiple languages. All articles are published in German. The individual language articles looking at language criticism in English, French, Italian and Croatian can also be read in the language the article investigates (the articles are hence available in German/English, German/French, German/Italian or German/Croatian).

The handbook is a publication of the project group European language criticism online (Europäische Sprachkritik Online, ESO). The ESO-Project is based in the European Center for linguistics (Europäisches Zentrum für Sprachwissenschaften, EZS), which is a cooperation between the Faculty for Modern Languages of Heidelberg University and the German Institute (Institut für Deutsche Sprache, IDS) in Mannheim. It is designated for researchers, young academics and students of the various philologies in Germany and abroad. It is also addressed to persons from other disciplines, especially those with a background in social and cultural studies.

The Handbook of language criticism in European perspective is also available in almost every book store and on the websites of most of the online book sellers.